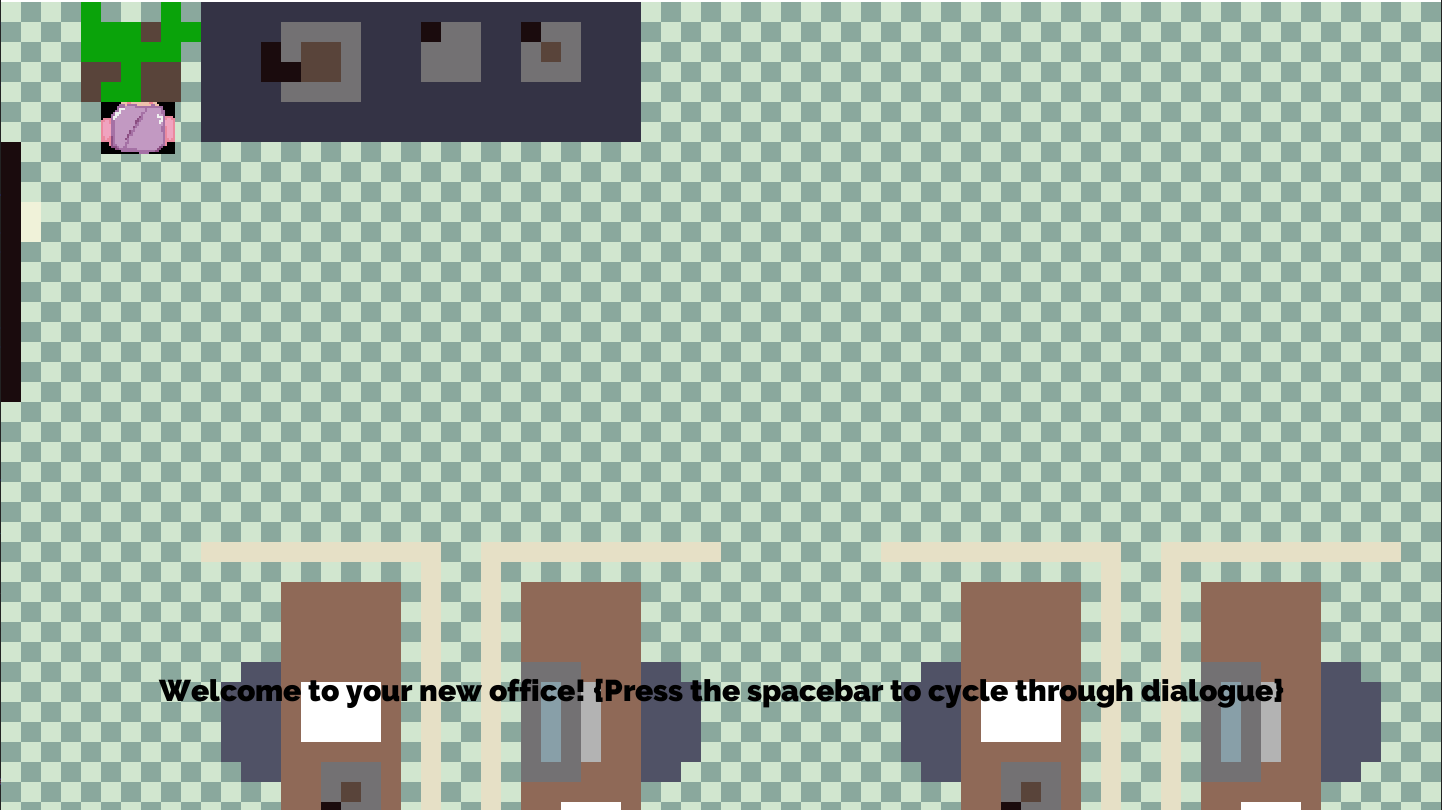 Our workplace simulator functions as a social advertisement that educates others on how women and gender minorities are often treated in the workplace. It is created through PyGame and is an interactive game coded completely in Python.

Our project is rooted in the injustices women and gender minorities face in the average workplace. We wanted to create a project that spreads awareness for these injustices and gives an accurate representation of improper workplace etiquette. We hoped that our workplace simulator, that functions as a social advertisement, can help us move forward as a society that respects women and gender minorities, in both casual and professional settings.

Our project functions like an interactive game. You control a woman named Cathy who navigates completing common tasks at her office job. You follow her as she prints out documents, makes coffee, and works at her computer. While Cathy goes about her day, she has several uncomfortable encounters with her boss, Ernest. Cathy must make tough decisions on what to do about Ernest's advances in an effort to successfully complete her tasks and avoid losing her job.

Workplace simulator was made using the PyGame library from the Python programming language. We made an infinite loop that ran the display, contained the game environment and had if statements that would be triggered by 'events' (pressing buttons, walking close to a certain area). We created a timeline of events in the game and converted them into dialogue, actions and sequences using counter and flag variables to trigger various if statements. We also created a map and character icons using pixel art to create an interactive environment, and used camera offset to easily scroll and move through it.

One of our biggest challenges was the time constraint; building an elaborate project in 24 hours is a difficult task when food and sleep breaks are factored in but we pulled through. Another challenge we faced was learning how to effectively use PyGame. Although we were familiar with Python, PyGame was a mostly new library for us. And lastly, the thing we found most difficult was coming up with a coherent timeline for the game that was realistic enough to build in the time we were allocated.

We're proud of completing our project and having every team member significantly contribute to its process. We worked well as a team and all of us made individual creative compromises for our group's success. We also divided the tasks based on each member's strengths so that we could have the ultimate combination of sturdy components.

Some of us learned a new programming language while others explored a new library of it. We also learned how to work as a team in a time-sensitive, almost high-pressure environment. And lastly, we learned new aspects of game development and the things to consider while building a game.

If we worked on it beyond the hackathon, we would add different possible endings and more decisions to make the gameplay longer in general so that it covers more scenarios. We would also improve the aesthetic aspects such as the logo, character animations, music, fonts, etc. To top it off, we would try to add a main menu, day/time markers, and a task checklist.

Our project was built completely using Python and its library, PyGame. We used Visual Studio Code as our IDE and used a GitHub repository to efficiently collaborate with each other.